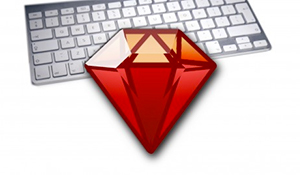 Maybe you are already a programmer (in some other language such as Java, C or Python) so you don't need a Ruby course that wastes time on telling you how programs work. This course gets straight down to business. It tells you what Ruby is all about, what makes it similar to other languages - and what makes it different. It explains the stuff you really need to know. It won't bog you down by trying to describe every gnarly little corner of the language. It concentrates on the essentials - with no unnecessary padding. If you need to get to grips with Ruby fast, this is the course for you.

Or maybe you've already learnt the basics of Ruby and you are looking for a quick way to revise your knowledge. With its video tutorials downloadable 'cheat-sheets' and interactive quizzes, Ruby For Programmers focuses on the most important features of Ruby and puts your knowledge to the test.

The course instructor Huw Collingbourne is the author of The Book Of Ruby. Huw has already taught over 22,000 people to program on Udemy.

Ruby is a cross-platform, object-oriented language. Ruby can not only be used for writing standalone programs but it can also be used for creating dynamic web sites thanks to web frameworks such as Rails. If you are already an experienced programmer in some other language, or if you've started learning Ruby and you need a clear, simple way to revise your knowledge, Ruby For Programmers is course for you.

Introduction to the Course
04:28
The Ruby Programming Language – a quick introduction
13:49
Strings
10:13

Huw has been a programmer for more than 30 years. He is a well-known technology writer in the UK. For over ten years he wrote the Delphi and Java programming column for PC Plus Magazine.  He has also written numerous opinion and programming columns (including tutorials on C#, C++, Smalltalk and Ruby) for a number of computer magazines, such as Computer Shopper, PC Pro, and PC Plus.

In the 1980s he was a pop music journalist and interviewed most of the New Romantic stars, such as Duran Duran, Spandau Ballet, Adam Ant, Boy George, and Depeche Mode. He is now writing a series of 1980s murder mysteries.

At various times Huw has been a magazine publisher, editor, and TV broadcaster. He has an MA in English from the University of Cambridge and holds a 2nd dan black belt in aikido, a martial art which he teaches in North Devon, UK. The aikido comes in useful when trying (usually unsuccessfully) to keep his Pyrenean Mountain Dogs under some semblance of control.