What is a Software Bug?

A software bug is a flaw, failure, error or fault in a computer software or system that causes it to return unexpected or incorrect results. 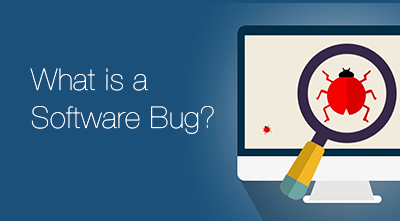 A software bug is an error in the programming of software or an app. Bugs cause problems ranging from stability issues to operability problems, and are usually due to human errors during the programming process. They may be the result of a mistake or an error, or they could stem from a fault or defect. Software bugs should be caught during the testing phase of the software development life cycle, but some can go undetected until after deployment.

Understanding How a Software Bug Occurs

Bugs are really nothing more than the results of erroneous code. If there is incorrect or inaccurate coding within software or an app, it can cause problems ranging from invalid output to completely crashing the software in question (locking it up or causing it to close unexpectedly).

Software bugs may cause the software to completely lock up or crash, but may also cause erroneous output without crashing the software. For instance, if software was supposed to add two amounts together, but subtracted them instead, the software would continue working, but the output would be erroneous or incorrect.

Software bugs can also cause ripple effects. For instance, the Therac-25 radiation machine suffered from a number of software bugs in the 1980s, and due to the ripple effect of those bugs, several patients actually died. Of course, most software bugs are not life or death considerations, but they are no less important for developers to identify and fix.

How Are Software Bugs Identified and Corrected?

There are six software development life cycle phases, and testing is one of the most crucial. Testing should take place after design, and it can occur both during the overall development process, as well as after design and development has been formally completed. A robust testing solution is needed to verify that all functions and features of the software operate as they are supposed to, and that the software or app remains stable during operation. During this testing period, bugs are identified and fixed.

However, it’s often the case that some bugs are not discovered during the testing phase. This could be due to the software being used in a way that the development team did not anticipate, resulting in a crash or erroneous operation. If a software bug is discovered by the customer or by the general public during use, a fix can be developed and then distributed during the maintenance phase of the software development life cycle.

Software developers have access to a wide range of solutions that can help identify software bugs. For instance, defensive programming solutions help identify typographical errors, while unit testing methodologies allow developers to test each function a piece of software might be called on to perform and identify flaws.

A software bug could be a minor annoyance, or it could be a major issue. In all cases, it is the responsibility of the software developer to identify, resolve and fix such bugs to ensure stable operation and accurate output.