Today’s consumer being always on the move has access to all the information he needs at the touch of his finger. He relies on his mobile phone for everything: be it finding a utility store in the neighbourhood or transferring funds from one’s bank account. Offering ease to consumers on the go has become the new market driver, compelling enterprises to extend their web services to mobile base. Any business that depends on its website for selling products or creating brand value, understands that devising an effective mobile-based promotion strategy is mandate.

Mobile driven businesses - how you move ahead in this direction to stay upfront. The answer is- Develop a mobile application. Mobile Apps have brought about a major paradigm shift in how a business functions and also the kind of services they offer to their end users. Offering customers with a mobile app or not could be a strategic decision, but deciding on the developing platform by roping in the best of the talent is budget oriented. Understanding the mobile development options for your app – device functionality, development skills of the team, budget allocation, data security etc. is critical to decide before you start developing your application. In the content below, we would address mobile app development particularly the platforms across which these apps can be developed.

There are three types of mobile app development platform: Native, Hybrid, And Mobile Web. We have incorporated the basic introduction of the platform types highlighting how an app developed across the mentioned platforms could reward or penalize the developer. It focuses on features of each method, their advantages, and disadvantages, under what scenario each platform is your best friend and when developing an app on a certain platform could prove to be a setback for your business.

Native Mobile Apps are specific to a certain mobile platform, like iOS, Android or Windows. They are developed with the purpose of functioning on a specific platform they are built for with the help of programming languages for respective platforms (most common being Objective-C or Swift for iOS and Java for Android).

When to Use a Native App

When to Avoid Using a Native App

The name “Hybrid” comes for a reason – they are partly native, partly web. Hybrid Apps are basically web content enveloped in a local repository (referring to the app platform here). The subject is coded in a web language but the primary feel is similar to iOS or Android providing easy access to native platform features.

When to Use a Hybrid App

When to Avoid Using a Hybrid App

Mobile Web Apps are not applications in its true sense but they are websites functioning similar to a native app. They run through a web browser but the layout is configured for a mobile device. When we access a website on a mobile phone from Google Chrome or Safari; the particular website opens as a webpage (in some cases, it comes with an option to install it like an application on the device). These apps require single time coding thus creating cross-platform mobile applications that run on multiple devices.

When to Use a Mobile Web App

When to Avoid Using a Mobile Web App

Overall the app industry is having its moment. The app age is upon us and the app economy, which is driven by software and enabled by mobile connectivity is deciding the future of the industries. Companies need to be smart and deliver high quality and secure experiences to their customers. Enterprises are more willing to embrace apps now.

Here are some points to ponder to help you strategize your platform specific decisions. 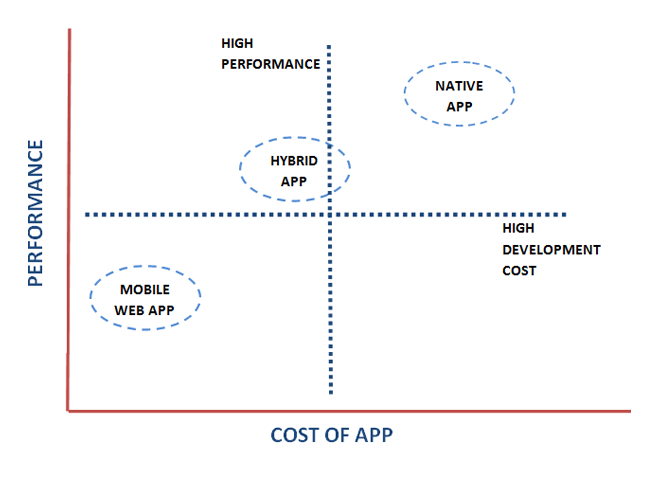 New features are available in the mobile market every now and then. To cope with the upcoming technological advancements and to generate higher revenues - the companies need to alter their business processes and strategies to keep their consumers involved. Selecting the right mobile app development platform for your app is critical when offering rich mobile experience to users. The deciding factor for any enterprise to select from among native, hybrid or mobile web platform depends as to what’s their priority in terms of the offering. Organizations should evaluate the pros and cons of each platform to take more informed decisions.

Leave comment
Your email address will not be published. Required fields are marked *
Comments

Indeed, Jass. Android is and would remain the biggest player for some time now!

This blog is for mobile application development platforms, it is a really awesome blog. They have explained each and every detail related to it, when to use native apps , when to avoid it, advantages of it and their disadvantages, differences and many more things have been explained about it.

Such a nice article, you explained all the valid points which should be taken into mind during working. This blog definitely helps everyone no matter experienced or fresher this gives the revise of every point so well. Keep writing informational things.

Thank you for the kind words, Akshit!